A new monster created by Dr. Gori and Karas. Gilagind first appeared by a mountain where he started to due a warriors dance due to the fact that when it was created it was given more brawn than brains. Spectreman then appeared and the two started to fight. Spectreman had a hard time fighting him due to its super strength and weaponry attachments. Spectreman does manage to cut some of the monsters hair off but, Dr. Gori eventually tells the monster to retreat and drills underground to escape.

To make his monster smarter, Dr. Gori forces Alien Zunou to posses the monster body so that Gilagind would have the advantage. During the night Gilagind reappears and lures Spectreman into battle using the same dance earlier to fool him into thinking that he was still the same. But, with Alien Zunou possessing him, Gilagind became a force to be reckoned with. Both clashed as Spectreman summoned his Spectre Sword and Shield to even the odds. Gilagind does manage to drill through his shield but, becomes his down fall when Spectreman uses his Spectre Flash to destroy his drill. The mighty Gilagind eventually met its end when Spectreman used his sword to cut off his head and after staggering for some time the monster eventually collapsed with the alien separating from its now dead body 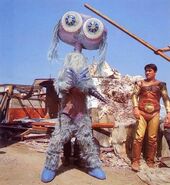 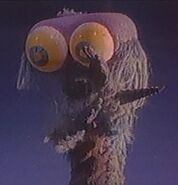 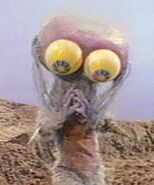