25 meters
NOTE: This is an article about the first Gokinosaurus. For the second one, see Gokinosaurus/Revived.

After learning that cockroaches were among the most repulsed creatures to earthlings, Dr. Gori mutated one to kaiju size. Through his insidious techniques, the scientist gave life to Gokinosaurus. Once the creature reached full size, he planted a control panel on its back so Karas could command the demon. The ape-man wasted little time before he sent Dr. Gori’s latest creation against Earth. Fortunately, Spectreman was nearby and transformed to battle the bug. As he struggled with the behemoth, Karas made his move and grabbed Rita and took her hostage. Spectreman was left momentarily stunned, long enough for Gokinosaurus to grab Nakiya, a human that was suffering from Dr. Gori’s black smog. The hero was left to decide either to save Rita or do as the Overlord commanded and save Nakiya and bring him to them so they could study the effects of the black smog on humans. In the end, Spectreman chose to defy his creators and went after Rita.

Greatly angered at his insubordination, the commanding aliens took Spectreman’s powers away from him, leaving him in human form to fight Karas. Soon afterwards, the Overlord reinstated the cyborg his powers. In exchange he would have to bring Nakiya to them after he saved Rita. Transformed, Spectreman quickly made short work of Karas and then went after Gokinosaurus. However, he would not prevail again. His strength taxed, Spectreman collapsed after firing a weak Spectre-Flash at the monster.

Dr. Gori was able to revive the monstrous insect, however. Greatly increasing its wing muscles and overall strength, the scientist ape sent the monster out again. This time it would be Dr. Gori himself at the controls, commanding the massive bug. Jouji quickly transform into the hero machine to meet the monster head-on. The resulting battle that ensued literally shook the heavens. Battling with unparalleled strength, the cyborg used everything at his disposal to kill the monster. However, when he destroyed the control device, the twisted cockroach beast was finally put at a disadvantage. Spectreman flew in and grabbed the insect before launching into the sky as if a rocket. Spinning several times, he hurled it back down to the unforgiving ground, killing it upon impact. 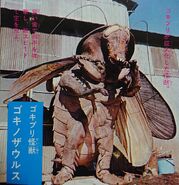 Gokinosaurus figure made by Masudaya
Community content is available under CC-BY-SA unless otherwise noted.
Advertisement