30 m
Magulah (マグラー, Magurā) are a race of ancient kaiju that appeared in episodes 25 and 26 in the TV series: Spectreman.

Magulah was a ancient monster that was sleeping underground with its infant still in its egg. It was awaken when Dr. Gori's monster Satan King landed on earth. This not only caused the monster to wake up but, also kill the infant. It soon came to the surface just as Satan King was fighting Spectreman. Though with Spectreman disposed of by Satan King, Dr. Gori shocked to see a monster not of his creation sends the king monster to attack. Both manage to do severe blows to each other such as Magulah throwing a rock at Satan King's head and the Satan King biting Magulah's arm. Eventually, Satan King was eventually forced to retreat. Magulah then goes to check on it's infant only to find it dead. Angered, the monster started rampaged the monster started to rampage which forced Jôji was force to become Spectreman. Both machine and monster fought each other but, Magulah gained the upper hand by breaking one of Spectreman's arms and then retreated underground.

Magulah now underground, burrowed straight to the city to attack Satan King. As the two monsters clashed, destroying everything they hit, Spectreman appeared and flew away to lead the two monsters out of the city. Though both persuaded, Magulah stood back and watched Satan King take on Spectreman before he was destroyed by the hero. Magulah then appeared and though Spectreman tried to reason with it and told it to leave the monster still angry about the infants death, attacked Spectreman. The monster then charged at Spectreman another time but, would become it's undoing as both monster and hero fell off a high cliff into the ocean where the monster then died. Jôji, though, felt sorry for the monsters due to being victims of Dr. Gori's evil plans and then spirits of both parent and child were both seen fading away into the night sky holding each others hand. 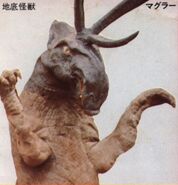 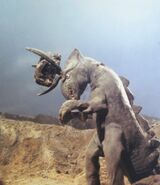 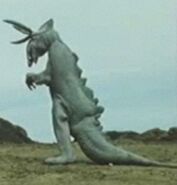 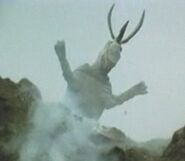 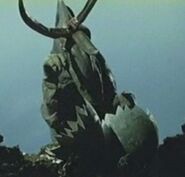 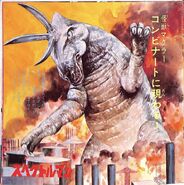