48 meters
NOTE: This is an article about the first Mogunetudon. For the second one, see Mogunetudon/Revived.

Rewarding humanity with death and destruction for the spoils and abuse of Earth, Dr. Gori sent his newest creature to rip the heart out of Tokyo. After a quick exercise test (which resulted the monster destroying an entire village), Mogunetudon tunneled its way to its final destination. Opening the gates of hell, the creature turned the once beautiful city, into nothing more than smoking ruins. Seeing the utter devastation, Overlord commanded Spectreman to transform and battle the marauding beast. Wrestling with the creature, Spectreman proved to be the eventual victor, as he blasted the demon’s eyes out with several energy blasts from his hands. Gori was not finished just yet however as he healed the massive behemoth and once again sent

it out. This time rising from the sea, Mogunetudon caused a massive tidal wave that struck and flooded the city. Jouji though would not give up the fight. After saving a young boy and attempting to take on the creature in a rowboat, Overlord transformed him to his real self. Spectreman was on the move again as he flew after the tunneling demon. However during their second fight, Mogunetudon proved to be more of a handful. Now immune to the energy beams directed at its eyes (like in its first battle), the beast made a fool of Spectreman. In the end though, the cyborg proved strong enough defeat the creature with a few blasts to its body. 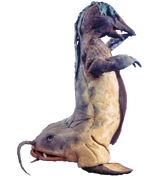 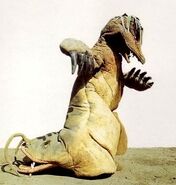 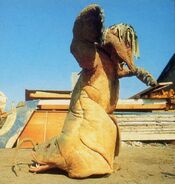 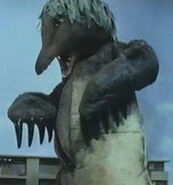 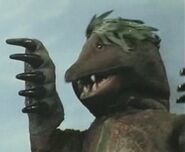