Born from the slug and toxic waste that pollute Tokyo bay, Dr. Gori brought new life to his very first monster. Still in his infantile like slug state, the beast allowed samples of itself to be collected and taken back to Pollution Control Headquarters. Once there, the newly dubbed Neo Hedoron attacked and possessed a scientist. Now armed with superior intelligence, the creature grew to massive size and battled the newly arrived on the scene Spectreman. Using a variation of his Spectre - Flash and his multicolored shurikens, Spectreman exhausted his power fairly quickly and was forced to regress in size. Once there a smaller Neo Hedoron (whom had presumable shrunk down with Spectreman) attacked him and knocked him unconscious.

Using its human intelligence, the beast sent out its tentacles throughout the city. Using his powerful limbs the creature destroyed all roads and bridges that led out of the megalopolis, thereby trapping the citizens. Even as it was bombed from fighter jets with napalm and bombs, Neo Hedoron proved to be unbeatable. Dr. Gori took action as well and unleashed a black cloud around the area, so as Overlord could not interfere with his planes again. But with will and determination, borrowed a motorcycle and drove to the airport. Taking control of a small person size airplane, he took the machine above the clouds to where he could contact Overlord.

Transforming one final time, Spectreman went to battle the jellyfish like creature for the final time. Battling till he could fight no longer, the hero collapsed to the ground and allowed himself to be covered by the mauling behemoth. Overlord was waiting though and used that instant to charge Spectreman’s circuits with enough voltage to fry Neo Hedoron once and for all. 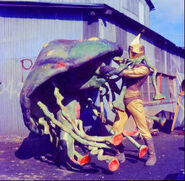