Unknown
(Silver Robo,   シルバーロボ?, Shirubārobo) is a cyborg kaiju that appeared in episode 27 of the TV series Spectreman.

A cyborg created by Dr. Gori, he gave his creation several powers based on Spectreman's own powers. To test it's worth, he sends it into the fray of several other monster's he had revived as his test subjects. On arrival he first challenges Mogz. Mogz seemed to have the upper hand using his smoke screen but, the monsters noise gave away his position and was soon Silver Robo cut Mogz causing him to bleed to death. He then challenged Gokinosaurus II, and the cockroach monster seemed to have then advantage flying around him but, Silver Robo used his Energy Blasts and shot him in mid air causing him to explode into smaller pieces. Silver Robo then continued his assult on Baronsaurus II and both seemed equally matched but, Silver Robo threw Baronsaurus II at Mogunetudon II and because of shot his fire breath at Baronsaurus II. Moguntudon II now would face him and buried underground to stump Silver Robo but, when the catfish monster rose to the surface, the cyborg used his arm blades a cuts off the creatures head. Silver Robo then made his way to Nezubirdon II who was attacking Jôji and two other of his friends in a cave. The rat monster seemed to gain the upper hand with his two heads and tail but, the cyborg broke free of his tail and decapitated Nezubirdon II's heads. The two heads though, came back and started to bite his shoulders. Spectreman then arrived on the scene, just as Silver Robo dealt with the two creatures heads and the two giants began their battle. Silver Robo seemed to gain the upper hand until he backed up into some electrical towers causing his body to heat up immensely. Finding his weakness, Spectreman then proceed to shot an icy mist at the monster causing him to freeze up and eventually fall apart. 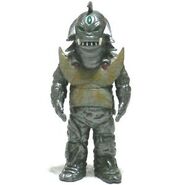