0 ~ Infinity
(Spectreman,   スペクトルマン?, Supekutoruman) Is the hero of the series. He is from the Nebula 71 Star, and must request transformation. His human form is called Jouji.

Spectreman was a cyborg created by aliens from Nebula 71 known simply as, "The Overlords." They sent him on a mission to Earth, to help stop pollution. In order to blend in with society, he created a human disguise called Jouji (George in the English Dub) and joined an anti-pollution team.

On the distant Planet E, a peaceful planet of apes, the evil Dr. Gori had been banished, for trying to conquer the planet. After many years of wandering the universe with his sidekick Rah (Karas in the English dub) he found the planet Earth.

Disgusted by the mistreatment of this planet, he decided to use the pollution to create the monster, Hedoron, to destroy humanity before they could ruin Earth. Luckily, Spectreman stepped in and fought the monster, setting it ablaze by charging at it after he'd been shot by Dr. Gori's ship.

However, Hedoron was revealed to have survived the flames and continued to wreak havoc in Tokyo City. Jouji transformed into Spectreman for the second time and used his Spectre Light to reduce Hedoron to a puddle of goo.

Time after time, Dr. Gori sent horrific monsters to eliminate the humans and Spectreman (at one point even bringing Hedoron back as Neo Hedoron), but none of them succeeded.

While Spectreman is virtually invincible, he can still be damaged. In one episode, when injured in the leg by an opposing monster, he bled green blood. He bled one other time, when bitten in the neck by a space vampire. Notably, his blood color had changed to bright yellow.

Jouji needs to ask the Nebula 71 people for permission to transform. He extends his right arm towards the sky and is then bathed in a ray sent by Nebula 71 and transforms. 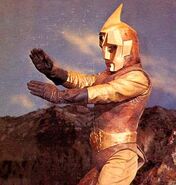 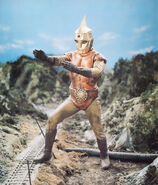 Spectreman Head Type A, B and C 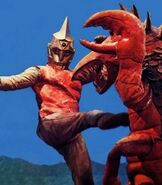