Another creation of Dr.Gori, Spincobra was created along side Zariganid to work together. Spincobra first appeared attacking a ship at sea and by the doctors command, it hide near a chemical plant to feed of the pollution to grow stronger. Later, the seaweed monster appeared and ambushed Spectreman while he was fighting his comm-rad. Spincobra was able to regrow the crab monsters claw and both were able to beat Spectreman. The two then made their way to the lighthouse.

The two surrounded the lighthouse and after some time both began to attack when they discovered that his comm-rad's eggs were inside. The two were assaulted by the army but, manage to wipe them out. They the went back and attacked the lighthouse but, by then Spectreman appeared and took on the two sea monsters and at one point the seaweed creature hid away underwater while he took on Zariganid. Spectreman then goes back to get the lighthouse to safety but, is ambushed again and then battle took to the shore. Spectreman gains the upper hand by throwing Zariganid (hiding in its shell) and throws it back at him. When the inside of the shell catches on fire, Spincobra rushes to the sea to put out the flame but, was distracted long enough for Spectreman to use the Spectre-Flash to destroy both of them. 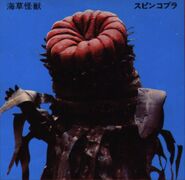