Thunder Gei (サンダーゲイ,   Sandā Gei?) is a cyborg whale kaiju that appears in episodes 17 and 18 of Spectreman.

Thunder Gei takes on a whale-like design. It is light blue in color, has a huge head, huge mouth with whale-like teeth in it, a pair of small eyes and two pairs of fins, one under the head and one under the tail.

Thunder Gei's design is changed in the manga. Its eyes are bigger, it has two big fags pointed upwards on its lower jaw and an armor on its head running down to its tail with spikes on it.

Created by Dr. Gori, Thunder Gei attacked the ships around the Sea of Japan with little remorse. Attacking like a phantom, the creature crippled Japan’s fishing business. So it wasn’t long before Jouji transformed into Spectreman, and took on Dr. Gori’s latest threat. Using his Spectral Eyes, the warrior spotted the whale and immediately set out after it. each time he neared the creature, it flung him back to Earth; thanks to its electrical waves. Eventually though, Spectreman was able to blast the creature out of the sky, sending it crashing into the ocean.

During their second battle, Spectreman finally was able to discover the whale’s weakness. The creature would mimic his moves. If he shrank in size, so would the monster. If he drained his strength and lay still, so would Thunder Gei. Dr. Gori, angered by his creature’s weakness, sent Karas to kill Spectreman in his weakened condition. The man ape attacked viciously, as Spectreman was forced to remain still and take it. Meanwhile, the Pollution Control team was putting a bomb inside the whale, as it laid still. Once they had finished they blew the creature up, leaving Spectreman now with the opportunity to whoop Karas once again.

Behind the scenes of the Thunder Gei prop

A Thunder Gei figure based on its series design

A Thunder Gei figure based on its manga design 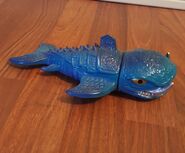 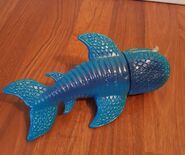